For a beginner BBQer the dreaded stall can be a thing of exasperation, frustration and even fear. To the uninitiated it can be off-putting, confusing and cause great angst especially when you have a deadline to meet with arriving guests.

What is the BBQ stall?

The BBQ stall is the term given to the cooking stage (often occurring around 65C+ (150F) where the internal temperature of the protein being smoked stops rising and often evens drops a few degrees. How long the stall lasts for can vary greatly from minutes to hours.

Why does it happen?

Moisture contained in the meat such as water, rendered fat and other fluids makes its way to the surface and evaporates from the heat. The evaporation causes the surface of the protein to cool off, or at least hold its temperature at a constant level. Eventually, all the surface moisture disappears, and the evaporation/cooling process stops and your meat internal temperature begins to rise again. It works much like the human body releasing sweat through the pores of the skin which cool the body and is then evaporated. The size of the surface area of the protein plays a role in how long the stall lasts, as does the internal composition of the protein.

How to beat it? 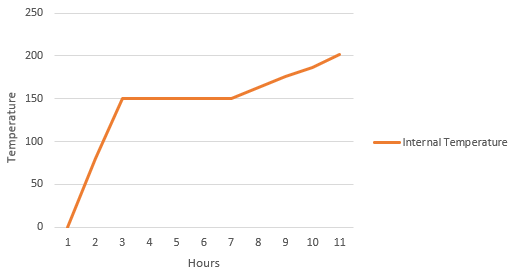 Graphical example of how a typical stall may play out

Did you find it helpful? Yes No

Send feedback
Sorry we couldn't be helpful. Help us improve this article with your feedback.